There’s a lot of hype that surrounds the Golden Triangle tourist circuit in India. Once you experience it for yourself, there would be no doubts as to why. The circuit spans three iconic Indian cities; Delhi, Agra, and Jaipur. Tourism thrives along the circuit, which has seen several tour operators offer modifications to travellers. A tour of the city of Udaipur is often added to the itinerary, as it allows tourists to see more of the diverse cultures and landscapes that India has to offer.

On a Golden Triangle tour with Udaipur, you would get to witness some of the most wonderful works of architecture in this part of the globe. Here are some of the many highlights in store for you!

This 16th century mausoleum served as one of the inspirations for Agra’s Taj Mahal. From an architecture perspective, the tomb displays a dazzling combination of Mughal and Persian architectural styles. The mausoleum had lost some of its sheen prior to 2007. However, restoration efforts for the next 6 years saw its glory restored. Geometrically speaking, the mausoleum is a picture of perfection, typically found in iconic Islamic architecture around the world. Apart from being home to the tomb of Mughal emperor Humayun, the mausoleum complex also houses the tombs of his wife Haji Begum, his favourite barber, and nobleman Isa Khan.

Construction of Rajpath started in the early 20th century, the story behind the imperious Rajpath is quite ironic. It was originally established to showcase the might and strength of the British Raj, even though the British were ousted only 16 years after its completion. The architectural idea behind Rajpath dates back to Imperial Rome in its heyday. The highlight of Rajpath is undoubtedly the India Gate, the memorial arch that remembers Indian martyrs from the dark days of World War I. Rajpath also provides access to various Indian government offices. Landmarks such as Rashtrapati Bhavan, North and South Secretariats, and the Indian Parliament are all located in and around it.

Agra’s worldwide fame can be mainly attributed to the presence of the legendary Taj Mahal. While the Taj is the proverbial top dog of architecture in Agra, it would be a mistake to skip a tour of the Agra Fort. Situated on the banks of river Yamuna, the fort was the brainchild of Mughal emperor Akbar. Construction began in 1565, with further additions being put into place by Shah Jahan, Akbar’s grandson. In what was originally a fort of red-sandstone, Shah Jahan added white marble, and turned it into an architectural masterpiece. The fort houses the famed Diwani-i-Am and Diwan-i-Khas, the halls of public and private audiences respectively, along with other attractions like the Shish Mahal, Khas Mahal, Moti Masjid, and Jehangir’s Palace. It’s safe to say, had the Agra Fort been in a city other than Agra, it would have undoubtedly been that city’s prime tourist attraction. Don’t miss out on this UNESCO World Heritage Site as it is one of the best places to visit in Golden Triangle.

Very few among the many architectural marvels of Jaipur are ranked above Hawa Mahal. In fact, it is one of the most talked about landmark in the Rajasthani capital. But words can never do complete justice to the work of art i.e. the Hawa Mahal. Constructed in the late 18th century, the Hawa Mahal is famed for its pink sandstone architecture. The honeycombed pattern stretches for the entirety of the five storeys, and looks like something you might imagine when you read a fairy tale. Inside, the corridors are cramped, and can get claustrophobic when tourists flock into the palace in droves. Once you make it to the top, get ready to be blown away by the majestic views of the City Palace, Jantar Mantar (the royal observatory), and Siredeori Bazaar. There’s also a museum with fascinating artefacts and relics from the days and decades gone by, which stays open from Saturday till Thursday every week.

Not only is Udaipur’s Lake Palace one of the highlights of a Golden Triangle tour with Udaipur, it is also one of the best places to stay in India. Since 1963, the Lake Palace bears the official name of Taj Lake Palace, and is one of India’s most extravagant hotels. The palace itself dates back to the 18th century, when it was brought to life as ‘Jag Niwas’ by Maharana Jagat Singh II. The palace covers almost the entirety of a four-acre island, which gives the impression of a hotel that floats. Access to the hotel is solely via boats, and this adds to the exotic feeling. The rooms inside the palace exude sheer class, with crystal and stained glass work, masterful paintings, and green and pink stones. If you are a romantic, and have the money to afford a stay at this 5-star spectacle, by all means, go for it!

The aforementioned are just a few of the best places to visit in Golden Triangle. Book your package on http://www.waytoindia.com/golden-triangle-tour-with-udaipurnow to enjoy an unforgettable experience in India’s most popular tourist circuit! 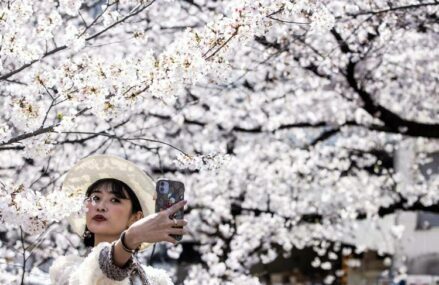 A Brief Guide to the Cherry Blossom Festival in Japan